Cowmations - recent work in acrylic made with squares from a flat edge. SOLD

The Original Triangle Wave painted in 1997 on Folly Beach, SC.  This is the first of a short series of triangle waves. 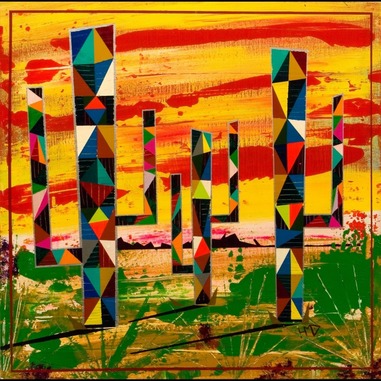 Desert Cacti was once stolen from a Charleston, SC eatery wall and reclaimed 9 months later by the artist.

Lightning Sea was painted in the late 1990's on Folly Beach and is an example of an early square brushstroke method developed after the triangles.

Oil on Glass - Derived from an early pattern I call 'Wavescapes', which i started in the late 1990's.  The waves are oil on glass window panes and may be ordered from me anytime for a very reasonable price. SOLD